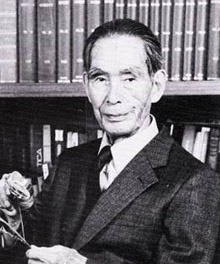 Born in Tokyo in 1893. Hitoshi Kihara graduated from an agricultural science course at Hokkaido Imperial University and received a physics doctorate. He left Japan to study overseas in 1925. He studied genetics and plant physiology and, as part of this research, conducted cytogenetic analysis of wheat (1943). He received the Japan Academy Prize for this research. He became a professor at Kyoto Imperial University and the director of the National Institute of Genetics. He later became the chair of the Kihara Institute for Biological Research. He discovered the ancestors of cultivated wheat and successfully synthesised wheat. He left these famous words: ‘The history of the Earth is recorded in the layers of its crust; the history of all organisms is inscribed in their chromosomes’. In 1948, he received the Order of Cultural Merit for making vast contributions to academia and sport. In 1955, Kihara led the Kyoto University Scientific Expedition to the Karakoram and Hindukush.
→ Detail of Exhibit