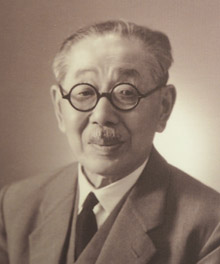 Seiya Ito studied phytopathology, mycology and received an agriculture doctorate. He established an integrated control method for blast disease (dactylaria grisea), which was prevalent in Hokkaido in the Taisho and Showa periods. He directed a disease control initiative that integrated agricultural test sites, government and farmers, and he led this initiative to success. He is commemorated by a ‘farmers’ testimonial memorial stone’ that stands in Kyowa-cho, Shiribeshi.
In 1935, Ito received the Japanese Agricultural Scientific Society Prize for his research on the integrated control of dactylaria grisea. In October of the same year, he gave a lecture at the Imperial Court. In 1941, he became the Dean of the Agricultural Department. In November of the same year, he became President of Hokkaido Imperial University. In October 1950, he resigned from this position. He published three volumes and seven issues of Mycological Flora of Japan. He became a member of the Japan Academy in 1950.
→ Detail of Exhibit