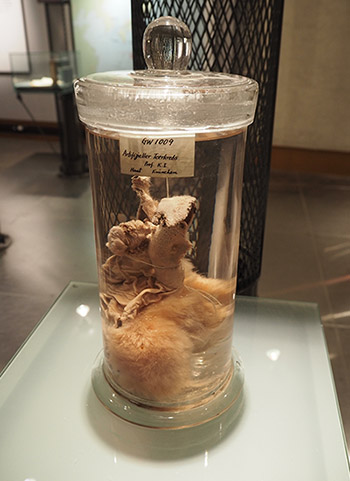 Tar Cancer Specimen
The world’s first successful artificially produced tar cancer specimen. Inspired by the cancer stimulation theory proposed by German physicist Rudolf Virchow in 1913, Ichikawa, in 1915, worked with Katsusaburo Yamagiwa to apply coal tar repeatedly inside a rabbit’s ear, which successfully resulted in cancer. There were 101 samples for a period of 70-450 days and cancer was produced in 31 of the samples. This study was a nominated candidate for the Nobel Prize.

→ Back to “The Spirit of Practical Science”