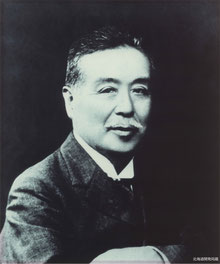 Isami Hiroi studied civil engineering and received an engineering doctorate. He was born in Kochi Prefecture in 1862 and entered Sapporo Agricultural College in 1877 after completing a preparatory course at the Imperial College of Engineering. He graduated from Sapporo Agricultural College in 1881 and became an official in the Development Commission. He became an assistant teacher at Sapporo Agricultural College in 1887 and a full teacher in 1889. In 1899, he became a lecturer at the Tokyo Imperial University from which he retired in 1919. Hiroi died in 1928. He was awarded the Order of the Rising Sun, second class.
Hiroi oversaw the design and construction of the port of Otaru and laid the foundations for the discipline of port engineering. With his virtuous character, Hiroi inspired many students. His classmate, Kanzo Uchimura, dubbed him the ‘pure engineer of Japan’.
→ Detail of Exhibit (PC) ・ (smartphone)