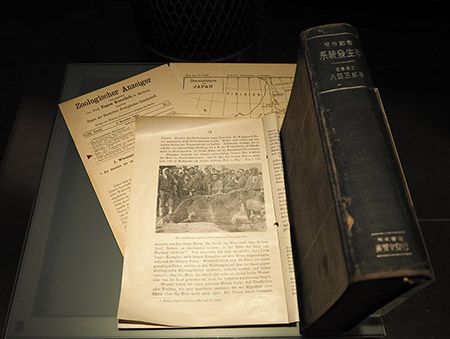 (Right) Book: Phylogenesis (1932, Yokendo)
Dr. Hatta studied in Germany, a country that led the way in animal embryology, and he became a world-renowned expert in embryology. His book was widely used as a textbook on animal biology/embryology, a foundation for applied science.

(Left) Excerpt from paper: ‘Zur Tiergeographie von Hokkaido’ (1913, Zool. Anz. Germany)
Dr. Hatta wrote this paper during his study in Germany. He discussed the distribution of amphibians, reptiles, and freshwater invertebrates, arguing that the Strait of Soya was the distinct demarcating line of such distribution. This paper challenged the prevailing orthodoxy of north-eastern biogeography by arguing that the Strait of Soya was more important than the Blakiston line in the Strait of Tsurgaru. This was the original paper on the Hatta Line.

→ Back to “The Spirit of Practical Science”