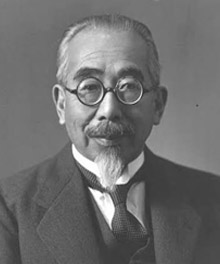 Born in Edo on 27 April 1860, Miyabe was among the second class of students to be admitted to Sapporo Agricultural College. He has been dubbed one of the ‘three geniuses’ alongside Kanzo Uchimura and Inazo Nitobe. He graduated from Sapporo Agricultural College in 1881, researched at the Faculty of Science, University of Tokyo, became an assistant at Sapporo Agricultural College and worked on the design of the botanical garden and herbarium.
He was accepted to Harvard University in 1886, returned to Japan in 1889, became a professor at Sapporo Agricultural College and devoted himself to researching the biogeography of northern flora, phytopathology and mycology. His published works include The Flora of the Kurile Islands (1890), The Laminariaceae of Hokkaido (1902), Plants in Sakhalin (1915, co-authored with Tsutome Miyake),  and Flora of Hokkaido and Saghalien (co-authored with Yushun Kudo). He received the Order of Cultural Merit in 1946, became an honorary citizen of Sapporo City in 1949 and a member of the Japan Academy in 1950. Miyabe died in 1951 at the age of 91.
→ Detail of Exhibit